We have a winner! 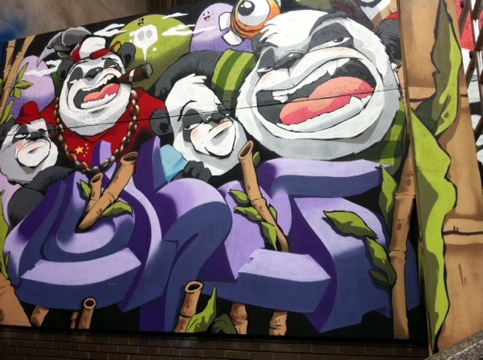 The competition has closed and Mother Goose has been summarily executed and laid to rest under a bonsai tree in the chottomatte Emperors garden may god have mercy on her soul. She was getting old you see.. Not quite the prize goose she was and in this industry there’s no room for sentiment… Time waits for no goose. And on that note we shall bring proceedings to a close.

Ladies and Gentlemen we have a WINNER!

His name is Cheo and as luck would have it he happens to be a dab hand at daubing his graffiti (see pictures above) We asked:

1) How do you feel to not only be part of Europe’s biggest ever graffiti jam, but also the winner of the *OFFICIAL* SeeNoEvil Golden Egg Hunt?!

I am over the moon! People like me don’t usually win things.

2) What was the highlight of the jam for you?

I think finishing my piece.

3) What is it about Bristol that makes such good graffiti artists?

It has to be something in the water…apart from the usual turds and rubber Jhonnys.

4) What’s next for Bristol – would you like to see this happening again?

See No Evil must be repeated it would be bloody stupid not to…huge success and positive vibes all round!

5) Who’s work did you enjoy seeing the most? 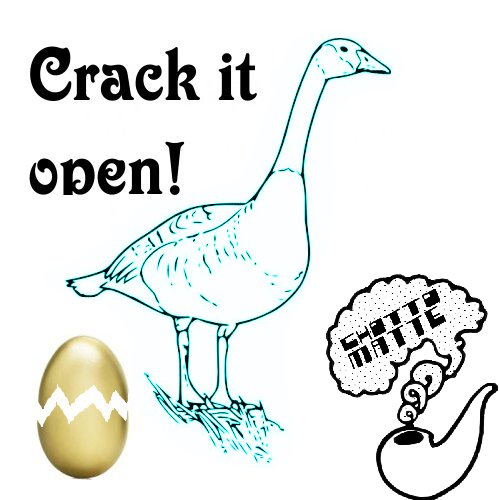 Then email to Mother Goose.

Cheo is in pole position but many of the remaining eggs are to be found in the after party tonight – it’s all to play for!!! 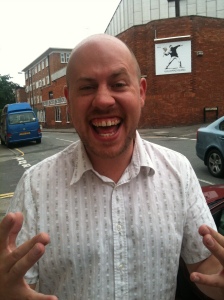 The eggs have arrived safely… Watch out for them in and around Nelson Street, Bristol on the 18th! Squaaaaark!

“Hey kid! Lend us some of that Carplan blue!”

It was Dekode of TCF, and next to him was Paris and perched rather precariously atop of him was another scruffy-looking East Hull youth type adding the finishing touches to their production. He looked a bit frightening, I better give him my paint I thought.
We came back the next day (what else to do on a grey cloaked Northern weekend?) and found a dazzling piece, a masterpiece production with spinning B-boy rockerz awash with energy.
My! Those East Hull ruffians certainly knew how to make the best of a bad can of Boys’s Carplan. Throughout those summers at the warehouse there was a friendly rivalry with TCF and DRA. For all intense purposes they were the same crew.
Nonetheless you could see the TCF crew had an energy and force that set them apart from the chilled vibe of the DRA at that time.
TCF were a three-headed beast and it worked so well. Dekode the egg-chasing friendly powerhouse, Paris the dark horse dreamy schemer and then,,, Sens,,, l’enfant terrible.
It was said he would on occasions leave pieces half-done much to the chagrin of other writers. “What is it?”… “Why’s he not finished it?”
Xens came at it all from a different angle, a rusty busted perspective.
Fired-up twisting metalic shapes were left scrappy and unfinished – where the hell was he going with all this? And then came the first buildings and tower blocks complete with roads and metal panels and cables and wires and beams and lights and cars set to a moody futuristic Turner-like sky and his style blossomed. Bristol was his platform and like his famous budgerigars, canaries and cockatiels, bird-brained Xenz had taken flight: Gambia, Australia, Switzerland, France and this summer to Ibiza to paint with old school writers Goldie and Inkie. David Sausage talks to Xenz. 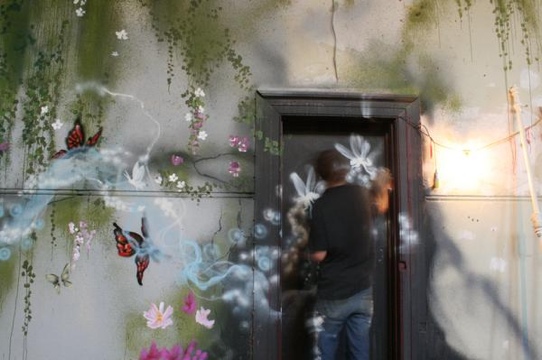 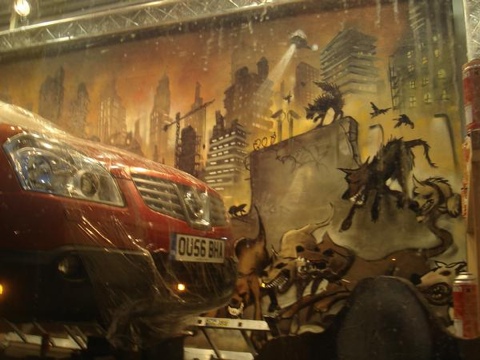 1) What is graffiti inside your mind?
A big dog that’s soft as a teady bear that has multicolured triangular hair with millions of spots .

2) Urban in Ibiza August 8th featuring Cheba, Inkie, Goldie, Xenz, Cept, Kid Acne, Chu, Zeus, Ben Slow, wow… What’s that?
Its an exhibition on an island full of hippies and loonies from all over the world.

3) Who was the cock of your year at school and if he saw you now would he spark you owt or say niyus won?
Can’t remember his name he was a dick but hed say Niyus won.

4) Why did graffiti happen so much and take such a decidedly experimental twist in Hull?
Lots of empty buildings and bored kids with the city devided in half by a river.

5) You’ve been a friend for a long time, after all what are friends for?
Borrowing things from.

6) Roads, Birds, Futuristic landscapes, lines and Twitter where are you going with all this?
Allong the spiral of life trying to help people feel ok about thinking outside what they are told is the way to do it or trying to counteract negative vibes with niceness.

7) Why do we paint graffiti?
To have trendy finger nails.

8 ) What’s the most ultimate maximus radickle thing you can do?
Orgasm

9) What will you be painting at Inkie’s See No Evil?
Something abstract with something real in the middle and something wrong up the top.

Xenz is unavoidable, but if you really need help finding him he’s here:
www.xenz.org